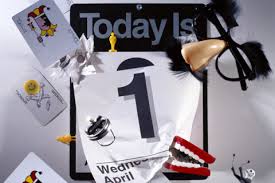 Yesterday was the infamous April Fool’s Day. I’m not one to partake in the festivities of the day, but there were a lot of pranks out in the tech world. Here are a few highlights:

I can’t get enough of this kid’s videos!

You know you’ve spent hours watching videos on YouTube. Sadly you won’t be able to anymore since the online video company announced yesterday that it’s shutting down. Turns out, YouTube was really just an eight-year-long competition to find the best online video. Yesterday YouTube Executives decided they had enough videos to finally choose a winner. Did you see the announcement at midnight? Just kidding.

Everyone always comments on the way Netflix’s specifies it’s content. However, yesterday the company added some new specific genres including the one above. Because who wouldn’t want to watch a tv show or movie based on a person with defiantly crossed arms?

Twitter decided yesterday that anyone who wants to continue using Twitter has to shell out $5 a month. If users want to use the free service they’ll have to use “Twttr”, where tweets no longer contain vowels. Nt fnny.

Gmail is All Blue.

Google previously stated they wanted to give Gmail a face lift. And that’s just what they did. Now EVERYTHING is blue, from the compose button to the Italics button. “It’s Gmail, only bluer,” Google states in it’s spoof video.

Remember when you were younger and you loved scratch and sniff? (If you don’t know what I’m talking about your missing out). Well Google has bought the concept to life with “Google Nose”, where you can now smell your searches. I bet you never thought this would happen in your lifetime. Yet for some reason I’m sure most of you don’t want to smell your searches…

Google’s best video yesterday was the introduction of its “new” broadband service, fiber-to-the-pole. Google wanted to show how it’s building high-bandwidth optical connections to homes and businesses in Kansas City. “We thought a lot about what we do to enable this kind of ubiquitous connectivity throughout our fiberhoods, and we realized that the answers were all around us: utility poles,” the on-screen spokesman says. “I mean, we’re already invested in building a fiber network using these utility poles so we thought: why not make them even more useful.” How crazy would it be to look out your window and see people gathered around poles with their laptops plugged into Ethernet ports and just hanging out?

What do you think about company’s April Fools’ Day pranks?